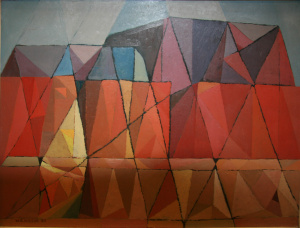 In the years following WWII critics, artists, and aficionados in mid-century Utah debated the role and merits of Modern art. Some argued for the traditional and beautiful, while others championed the turn to abstract styles and subjects. Ultimately, they argued, the viewer should be the judge. Good art, they claimed, could be determined by the viewer. In Mixed Reviews we’ve recreated the world of mid-century Utah art, showing artworks by both traditional and modern artists working in Utah c1946-1960.

70 years later we’re reopening the debate and inviting you to become the critic. Which pieces do you like best and why? Which pieces capture the world, experiences, and ideas of Utahns post WWII? Which ones are the most fun?

Celebrate mid-century modern art, culture, and design with us in this fun and playful exhibition. You get to be the judge!


Image: Warren Bingham Wilson, The Bastioned Wall, oil on board, 1953