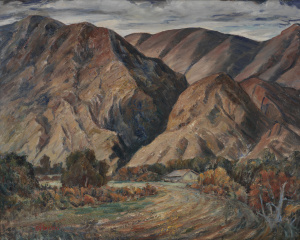 Since the early 1900s the Springville Art Gallery, now the Springville Museum of Art, has been a fixture of the community. Many Springville citizens attended high school next door and remember coming to art and music classes in the galleries. Recently, Mayor Rick Child reminisced with Museum staff about his memories of the Museum and his friend, the artist Blaine Frazier, who attended Springville High School and was involved with the Museum in the late 1940s. The stories from Mayor Child and Frazier’s relatives demonstrate how artists, advocates, and curators built the Museum and cemented its importance to Springville. This exhibition celebrates several of these figures who influenced the Springville fine arts community from early to mid-twentieth century, including B.F. Larsen, Wayne Johnson, Glen Turner, Oliver Parson, Blaine Frazier, and Mae Huntington.