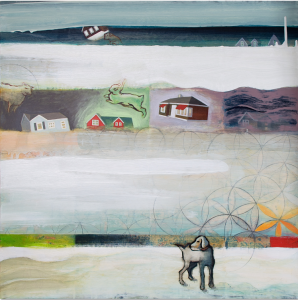 Three Mile Radius, an exhibition featuring the art of Jacqui Larsen and the poetry of her husband Lance Larsen, Utah's Poet Laureate, documents the people, places and things of Springville, Utah. Jacqui and Lance worked with only one rule: that their inspiration must come from what they find in the three mile radius that surrounds Jacqui’s studio.

In their own words, "Instead of looking to Tuscany or New York, Jacqui and Lance turned their attention to what was right under their noses: scrubby deer, cemetery angels, old marquee signs, an abandoned ambulance, a hut from the Topaz internment camp, lambs and llamas, a drugstore where drinking a chocolate malt qualifies as an emergency (SOS).  Too often we move from one box to another (home to car to store) without taking in the travails and triumphs of our daily travels.  Open secrets, we might call the sights we miss.  Jacqui is a runner and inveterate explorer, Lance more of a staggerer, but together they’ve combed the highs and lows, the ins and outs of our fair city.  Or is it a hamlet?  Or is it a confluence of invisible springs?  Or is it Arcadia?  In this way, their collaborative show Three-Mile Radius was born.  Here follow the rules they set for themselves: 1. Step outside and wander like Johnny Appleseed or Sacagawea.  2. Keep within three miles of ground zero (Jacqui’s studio).  3. Nose to the sky, feet to the ground, eyes to the everything. 4. Take notes in images and words.  In this project of paint and poetry, Jacqui and Lance hum this town of many waters."

This exhibition is generously sponsored by Central Bank.