ROCK THE VOTE: PRESIDENTIAL PORTRAYALS PAST AND PRESENT 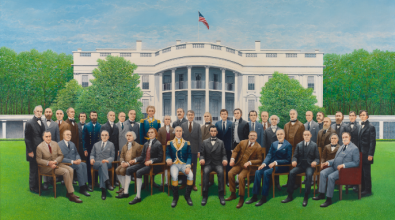 This educational display juxtaposes depictions of presidents and their opponents from a variety of viewpoints. Through works of art historical and contemporary, promotional and critical, elite and popular, this playful exhibition examines what it means to be presidential.

Since George Washington was appointed president in 1789, artistic portrayals of our Commander-in-Chief have varied almost as much as the 44 men who have held its office.  Historically, the most revered presidents are depicted representing American ideals such as liberty, leadership, and freedom.  Every four years presidential hopefuls present a carefully constructed campaign through posters, TV commercials, and all types of media in an effort to convince the American public they are the most well-suited to hold America’s most important office. Critics and commentators alike often try to poke holes in these orchestrated images of presidents and their opponents with exaggeration, criticism and caricature.

“This mini-exhibition, in our new Museum Underground, reflects some of the fun and seriousness of the campaign season in presidential elections over the years,” said Dr. Rita R. Wright, Museum Director. “It is intended to be a bit quirky, yet informative. We might even say we included some “cheeky” elements to highlight the wide variety of positions and polarities that surface during an election year.”

Emily Larsen, Museum Assistant Curator, said, “It was fun to curate this show because it gave us an opportunity to pull some pieces out from storage that we don’t get to display often.” Some of these pieces include busts and sculptures of presidents, different cartoons and a painting by Ralph Schofield of all the presidents up until Carter in front of the White House. Larsen continued, “It was a great opportunity to learn more about our political history, and to critically think about how presidents are portrayed and how they portrayed themselves.”

The display will also showcase campaign materials such as posters, buttons, mints, etc amidst the artwork. “I personally love when fine art and popular images and items are shown and analyzed together,” Larsen said. “It was fun to get to find all of the memorabilia on display in the exhibition.”

Special thanks to Mike Winder, Ron L. Fox, and Leslie Jones for the items they have provided from their collections for the display.

We hope that this exhibition will get people thinking about the elections this fall and push them to vote on Election Day.

“Whatever your presidential choice, we hope visitors will get out and vote—AND, come see the display of buttons, banners, and videos of presidential races in the past,” said Wright.

Image: Ralph Hewett Schofield, A Meeting of the American Presidents, 1978