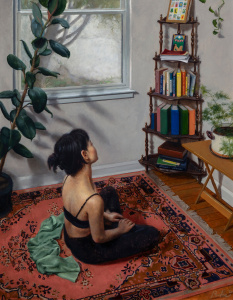 The artworks in this exhibition represent a partnership between the Springville Museum of Art and the Art Renewal Center, a premier exhibition venue for artists working in the classical tradition. Each year, one Utah artist is selected from their juried competition to be featured in the Museum in an effort to support and celebrate traditional Utah artists. The featured artist for 2021 is Lis Pardoe.

Pardoe's contemporary, classical oil paintings create introspective spaces that encourage the viewer to pause. Playing with depth, the textural elements of focus invite the viewer to step inside. Pardoe portrays intimate and domestic scenes, resulting in delicate yet relevant worlds that offer an escape from life's daily stressors. In Pardoe's work, the botanical representations act as a grounding force - an ever-present reminder of our universal connection. Working from life, photography, and imagination, Pardoe spends hours with her friends and family, who pose for her. Her painting titles are often a summation of her initial vision and the experience of interacting with her subject.

Pardoe was born in Sandy, UT, and grew up along the Wasatch Front, splitting time between Sandy and Centerville. Shortly after graduating from Viewmont High School in 2010, Pardoe began a five-year apprenticeship at the Hein Atelier of Traditional Art, which she graduated in 2015. Pardoe currently lives, works, and teaches in Salt Lake City, Utah. She won a Museum Exhibition Award in the 15th International ARC Salon (2021), has exhibited at noteworthy institutions such as the Utah Museum of Contemporary Art (2020), and was collected by Utah's prestigious Alice Merrill Horne Collection (2020). Meyer Gallery currently represents her (Park City, UT).

As a young boy growing up in Brazil, Gustavo Ramos loved to draw, but a fine-art career wasn’t even a notion in his mind. Then, when he was 15, Ramos moved with his family to the United States. The change was startling for the teenager, who didn’t know any English when he arrived at his new high school in Arizona. “I had to depend a lot on observing body language when trying to communicate” Ramos recalls now, a decade later.

It proved to be a seminal time for the budding artist, whose careful observations of people’s expressions, gesticulations, and postures motivated him to depict the figure in pencil. “It gave me an edge in depicting those subtle bodily gestures that help tell a story,” he says. Determined to paint like the old masters, Ramos exclusively worked from life during his training. Now, when using reference photographs he has taken of his models, says Ramos, “I can conceptualize form. I’m able to look at the flat surface of a painting and picture space inside that surface.”

At 26, the Phoenix-area artist is already snapping up top accolades for his sensitive, contemporary portrayals of the figure in oil. In works like Infinity—a painting starring his wife that touches on the mystery of life after death and the concept of eternity—he has been exploring storytelling techniques that convey more than just someone’s likeness. For guidance, he often studies Rembrandt van Rijn’s evocative portraits. “Rembrandt created the sense of a real person who had real experiences,” says Ramos. “That’s something I try to do with my work.”

Springville Museum of Art was fortunate to be able to purchase Nostalgia by Gustavo Ramos for the Permanent Collection following his display as Art Renewal Center's Featured Artist.

Ryan S. Brown is an American painter in the naturalist tradition. After graduating BYU, Ryan went on to study classical painting in Florence, Italy at the Florence Academy of Art, where upon graduation he won the Painting of the Year and Presidents awards. Returning to Utah after his studies in 2008, Ryan opened the Masters Academy of Art in Springville where he passes on the methods and practices within the tradition of classical painting. Ryan’s work contains the time-honored qualities of craftsmanship in drawing, color, and composition that, although true to the tradition and heritage of painting that pays homage to past masters, have a uniquely current feel. His works reach past culture, race, or religion to connect on a human level with viewers. These human moments provide us with something that, in today’s world of instant gratification and social media, are all the more important.  His works remind us of our connection as human beings. They demand pause, contemplation, and consideration that moves us far beyond the pleasing images.

Born in Powell, WY in 1974, Casey had a passion for creating art from an early age. But it wasn't until he attended Northwest College and studied with John Giarrizzo that he gained a strong desire to be a painter. After Northwest, he continued his education at Brigham Young University in Provo, UT where he graduated with a Bachelor of Arts degree.

And after a ten-year stint as a graphic designer, more training followed with an apprenticeship alongside renowned portrait painter William Whitaker. Casey now paints full-time in his north-lit studio designed after those of the old masters.

Receiving First Honors in the Portrait Society of America's 2011 International Portrait Competition as well as a Certificate of Excellence the previous year, Casey has received international notoriety and recognition for his work and is collected both publicly and privately. Casey and his wife, Amanda along with their sons Evan, Owen, and Cameron, currently live in Utah.

Image: Lis Pardoe, The Space Between, oil on aluminum panel